We present you the main images of the second transnational meeting that took place in the 25-29th of April period, in the partner institution from Turkey, Kastamonu Mesleki ve Teknik Anadolu Lisesi.

The first three numbers of the

“Scaramouche” Magazine were officially launched in Romania, too, the 8th of April 2016. After the festivities organized in Italy, in Portugal, in Turkey and in Cyprus - in all the partner institutions of the Erasmus+ Strategic Partnership “Comics in Teaching Languages / La BD en classe de langues”, it was the turn of the coordinator to manage a special event with big impact on the community. That’s why the environment was chosen to be the International Symposium for Intergenerational Education, organized together with the School Inspectorate, “Alexandra Nechita” and many local and regional institutions - City Hall of Vaslui, CJRAE Vaslui, House of Didactic Body Vaslui, the Departmental library Vaslui, the Prefecture of Vaslui.

In the meantime, the special website of the Comics Magazine “Scaramouche” was launched – http://lang-platform.eu/scaramouche It has its own Facebook page and it is interconnected with the others sites of the project.

You are also invited to evaluate every number of the magazine, in the LMS system and soon even on the website.

Every number can be read online in *flash format or downloaded on the personal computer or device, in *pdf special format with thumbnails.

Enjoy “Scaramouche” and become our special guests - the interactive public of the comics used as educational vehicle for learning languages!

The 8th of April 2016 was organized in the frame of the Erasmus+ Strategic Partnership “Comics in Teaching Languages / La BD en classe de langues”, a very important scientific event which combined the dissemination and the exploitation of the project’s results, the work of pupils and teachers from all the institutions involved in the partnership, the functioning of the regional Consortium for implementing the project: the International Symposium for Intergenerational Education, organized together with the School Inspectorate, “Alexandra Nechita” School (principals Alina Moraru and Vladimir Baban) and with the support of many local and regional institutions (City Hall of Vaslui, CJRAE Vaslui, House of Didactic Body Vaslui, the Departmental library Vaslui, the Prefecture of Vaslui – all the institutions that are participating in the Consortium for the project’s implementation). The international partners of the project joined this effort and presented high-level scientific and project management contributions: “Comics in Portugal” – by the project team of Barreiro; “Teaching with Comics in Vialonga” – by the project team of Vialonga – Portugal; “The Role of the Culture in the Study of a Foreign Language” – by the project team of Frosinone – Italy; “The KA2 strategic partnership in the frame of Microsoft E2 Educator Exchange Hack The Classroom 2016 Budapest” – by Antonis Antoniou, the project coordinator of the Cyprus team; “The Usage Of Culturel Heritage in Comics” is the title of the scientific paper of Kastamonu project team from Turkey, lead by Ilker Aricioglu, the project coordinator.

The International Symposium was honored by the presence of His Excellency, the Educative Attaché of the Spanish Embassy, Vicente Lopez Bréa-Fernandez, the great friend of Vaslui County, specialist in languages and in new technologies, who declared himself very proud to be here, in Vaslui, for the 3rd time – and to assist at the positive events of the language teachers, to admire the talent and the competences of the participating pupils and the quality of the products.

The Comics Magazine “Scaramouche” – the first 3 numbers - officially launched with this occasion was really appreciated and admired by all the pupils and the teachers present in the conference room. Big stories, high quality of the comics, beautiful colors and high class print quality were valued as forming a professional product and it was said that the next numbers are impatiently waited by all the categories of public. The special website of the magazine – http://www.lang-platform.eu/scaramouche - was also launched, and the magazine can be read online, in flash dynamic format or downloaded on the personal computer or device, in *pdf special format with thumbnails.

The Learning Management System (LMS) of the partnership – the Intellectual Output of the project was also presented in a first version from the side of the users – pupils that described in French their experiences as beneficiaries of this interesting and powerful learning instrument proposed by the conceivers of the Erasmus+ project.

Another event was the official launching of the Didactic Magazine “Clepsidre/Hourglasses” – in a special format dedicated to the event, containing all the contributions of the indirect section participants. The volume has over 880 pages and almost 500 contributors from 36 (of the 41) departments (judeţe) of Romania, and from the 5th foreign partner institutions. You can download here your *pdf copy and use it in your didactic activity.

The main moments of the Symposium were the following presentations: the project coordinator, Alexandru Mîţă spoke about “The Strategic Partnership Eramus+ KA2” and about “What is LMS, the Intellectual Output of the KA2?”. Than after, the Spanish teachers presented their scientific communications:  Gabriela Tofan – „La enseñanza des lenguaje especializado a los alumnos que no estudian el espanol como lengua extranjera” and Bogdan Nedelcu - "Mi experiencia de enseñar español".

The teachers from “Alexandra Nechita” had also very interesting presentations about their didactic activity: they spoke about the kindergarten of the school and its importance, about the pedagogic tendencies in working with special needs pupils; about the perception we have concerning teaching and even about how to simulate a volcano activity.

The event was also created by the artistic groups of the hosting school “Alexandra Nechita”: School Theater, poetical theater dances, songs (popular and modern), ballet - from the very little age to 8th form pupils. The best students of the school were awarded with special diplomas for recognizing their efforts and the value of their contributions to the school ethos.

The Symposium was sincerely appreciated by all the participants and we hope that, by the mean of the documentary movie and of the pictures gallery, you will come aboard and you will have the opportunity to live exactly the same emotions as the participants from this beautiful spring day of 8th of April.

The 8th of April 2016, we organize in Vaslui an important event, with scientific and practical character, under the frame of Erasmus+ KA2 Strategic Partnership “Comics in Teaching Languages/La BD en classe de langues”:  The International Symposium for the Intergenerational Education.

An important place will be dedicated to the spreading of results of the Erasmus+ KA2 Strategic Partnership “Comics in Teaching Languages/La BD en classe de langues” – teachers from the coordinator project team will participate with scientific reports, pupils will bring their testimonies as direct participants, the partners from abroad will all participate by the mean of the videoconference system/video recordings.

Until now – the  30th of March 2016, there are almost 500 participants - from all Romania and from abroad! And they continue to send us their works on the intergenerational didactic dialogue!

We will broadcast live all this event on Youtube and we will also share this experience through the documentary movie we will produce, through the scientific works and presentations that will be published in the special didactic magazine “Hourglasses”, published on this occasion and by the special number of our “Scaramouche” Comics Didactic Magazine that we prepare. 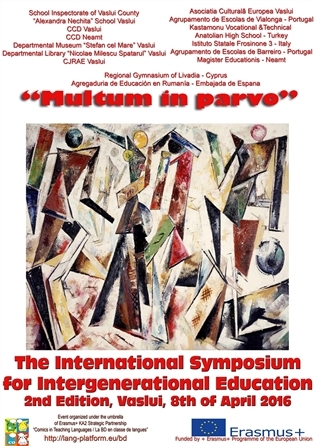 It was a unique opportunity for me to participate in the Microsoft E2 Educator Exchange #HackTheClassroom which took place in Budapest between the 8th and 10th of March 2016, having been selected from thousands of educators worldwide to join a group of over 300 educators representing over 75 countries.

I was delighted to be welcomed to Microsoft’s Educator Exchange event where the most innovative educators from around the world came together and shared expertise in integrating technology and pedagogy to advance learning and transform education.